School Pictures at the Hood

School pictures. Everyone has a memory of them, everyone has them framed on walls, in family albums, in boxes lost in the attic. They can be endearing. I recently ran across a group photo of the kindergarten class I attended when I was four years old, and was amazed that I could still name most of the kids in the shot, despite not having seen (nor necessarily thought of) them for over sixty years.

At Conversations and Connections at the Hood Museum this week, Marianne Hirsch and Leo Spitzer explained why they curated School Photos and Their Afterlives, one of the current exhibitions at the Hood. “Because school photos are ubiquitous,” said Spitzer, and notably, they appeared early in the history of photography; one of the earliest examples is a daguerreotype of Princeton University’s graduating class of 1843. Hirsch added that she had been involved in other projects dealing with “everyday” photos such as family and street photos. She remained interested in a photo’s affective qualities, not only in how viewers feel when looking at them, but also in imagining how the subject of the photo experiences the process of being photographed.

Spitzer and Hirsch have mined this subject in their book, School Photos in Liquid Time: Reframing Difference (University of Washington Press, 2020). Asked how the process of curating an exhibition differed from a print medium, Hirsch talked of the sheer volume of candidates for inclusion in the exhibition (“everyone was sending their school photos to us”) and the difficulties in rejecting any of them. The book allows for more explicit context; in the exhibition, “the images have to speak for themselves.”

And these images do speak volumes. The exhibition includes three categories: Europe and Its “Others,” the United States and Its “Others,” and a final section, Imagining Justice, focusing on the repressive regimes of Mexico and Argentina, where school photos served as testimony to the very existence of “disappeared” children. 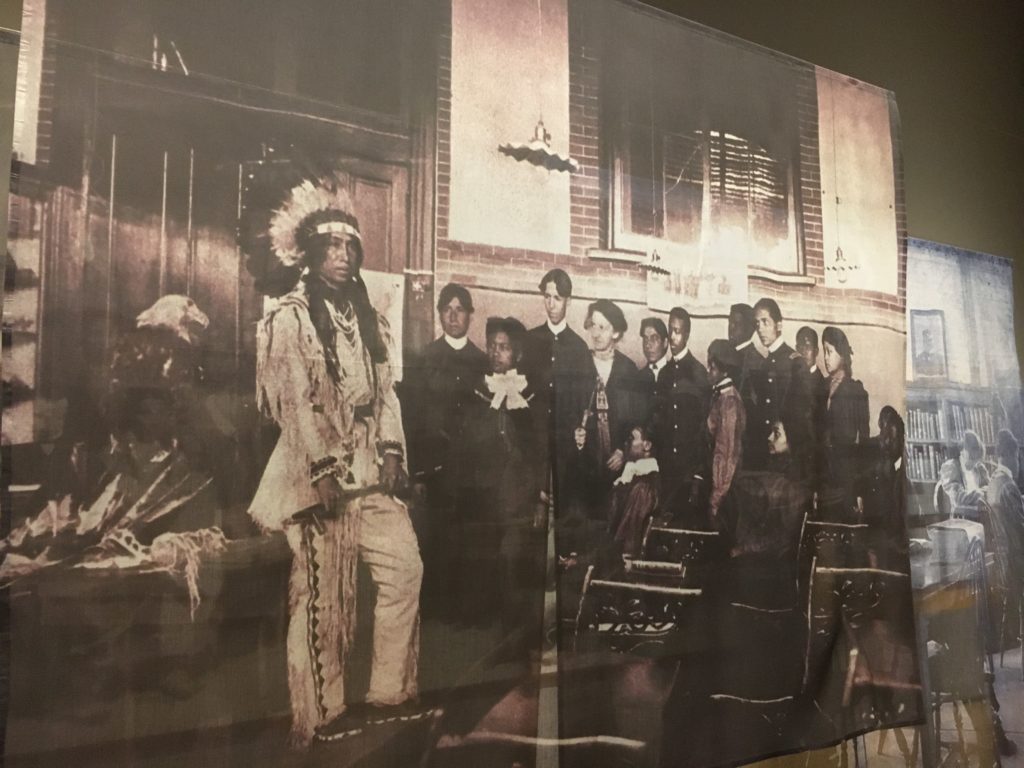 An enlarged, centerpiece photo (above) hangs as a scrim in the middle of the gallery. It is of Native American school children at a government-run boarding school, shorn of their hair and stripped of the indicia of their culture, forced to wear military-style uniforms while they stare—presumably for educational purposes—at an American Indian in a feathered headdress. It is a photo of remarkable cruelty. (Work by Carrie Mae Weems based upon original photos by Frances Benjamin Johnston. You can learn more—and hear the artist’s own words—by clicking here.)

The curators also spoke about the role of school photos in serving the schools themselves rather than the subject children. Schools often promoted an ideology; Hirsch, who was born in Romania, said the exhibition contains her own school photo at a state-run school; in it, she wears her pioneer kerchief. One of the most arresting photos is of children in the Łódź ghetto taken by Nazi photographer Walter Genewein, reimagined and re-imaged by Mirta Kupferminc, who wondered what those children saw as their own images were being captured. In “The Witness” (below for reference, but you really need to see the original) Kupferminc reversed the gaze so that the children are looking back at the photographer, now the object.

This is an exhibition that requires ocular stamina, as many pieces are richly detailed and the explanatory notes are illuminating. Hirsch is delighted by the conversation between this exhibition and the one in the neighboring gallery of portraits of current Dartmouth students and community members produced by photographers Kali Spitzer and Will Wilson, who were recently in residence at the Hood Museum. (See photo below.) Hirsch believes the portraits speak to “what survives, the resilience of culture.”

A personal note: a high school friend of mine has shared a story many times over the years about her own Catholic grade school photo. In it, she appears in a row of children, sandwiched awkwardly between and slightly behind two boys. I asked her to repeat her story for this post. Here is what she wrote:

I only had one nice dress that my sister made for me and I wanted to wear it for the class photograph in 8th grade. I kept my sweater on all day and took off my sweater for the photo. Nuns and priest were upset that my bare arms were showing. They put two boys on either side of me (one was my cousin). They positioned them so their shoulders were in front of my bare arms.

We used to laugh at the story, at the photo, at the nuns’ moronic attempt to shield the world from the sight of (gosh!) a young girl’s bare arms. After viewing this exhibition, thinking about ideology and putting oneself in the place of the child being photographed, the photo is a bit less funny, and it says so much more.

School Photos and Their Afterlives continues until April 12, 2020. Admission is free.

This is Artful, a blog about arts and culture in the Upper Valley. Please sign up to receive future posts right in your inbox. 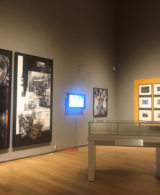 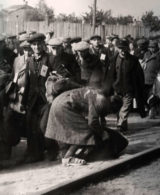